The talented team of Shop Scotland designers and makers are busy as ever creating, selling and exhibiting. These little empires of Scottish success never stop and we’re thrilled so many of them are celebrating amazing news this month. SO many small biz business success stories recently. Here are a few of the reasons we’re raising a glass to our amazing Shop Scotland members this month. Congratulations!

Penguin Parade (Edinburgh) and Adrian McMurchie (Glasgow) – were both given the honour of decorating an Oor Wullie to partake in the huge interactive Oor Wullie’s Big Bucket Trail this summer. Over 200 Oor Wullie’s were spread around Edinburgh, Glasgow, Dundee, Aberdeen and Inverness areas making this Scotland’s first-ever national public art trail. Adrian’s Wullie was outside the Riverside Museum in Glasgow, and Penguin Parade’s Wullie was on Shandwick Place in Edinburgh’s West End. If you missed seeing them out and about, you can view all the Oor Wullie’s from the trail from Friday 13th-Sunday 15th September as part of their Farewell Weekend in St Andrews Square, Edinburgh. You could even own your own Wullie’s as all the sculptures will be auctioned off on the 13th September.

The Bonnie Bra Company (Glasgow) – only went and won another award! At the end of August Bonnie was presented with the highly coveted title of ‘Small Business, Scottish Woman of The Year 2019’. This is Bonnie’s second major award in only a few months, the first being ‘Scotland’s Most Unique SME’ at the Scottish SME Business Awards 2019. 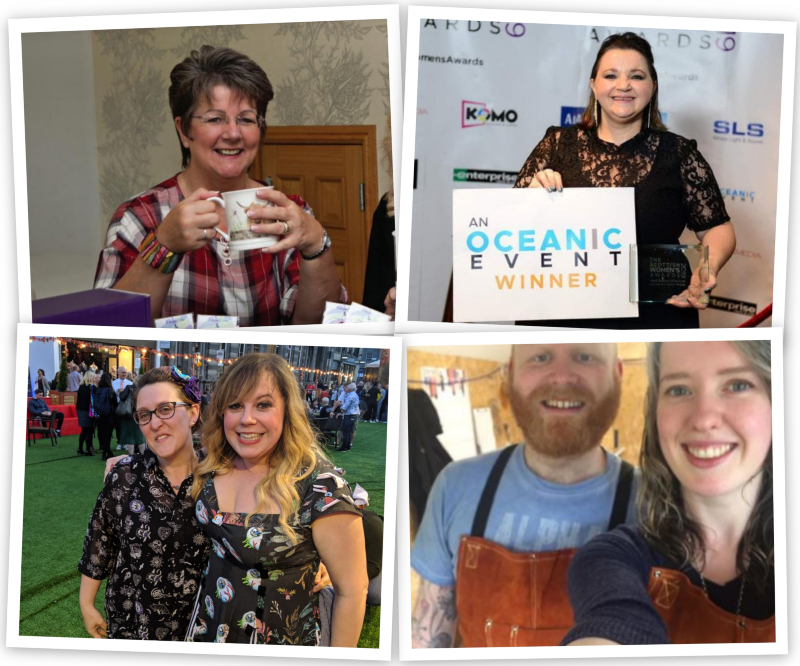 From top left clockwise. Scottish Keepsakes, The Bonnie Bra Company, The Silver Grasshopper, Off With Her Head Millinery

Scottish Keepsakes (Kilmarnock) – are nominated for 2 awards in the Association of Scottish Businesswomen Awards. Carol and her fabulous business have been shortlisted for ‘Exporting Business of the Year’ AND ‘Business of the Year’ – the winners are announced mid-September. Good luck! Scottish Keepsakes were also featured recently in a fabulous double-page spread with WeeBox in Business Scotland, you can read the whole article here, pages 46-47.

Adrian McMurchie (Glasgow) – has a couple of new Glasgow stockists. Along with Velvet Moon Gifts, The Shop of Interest, Spirito Gifts and Clydeside Whisky, you can now also find art and homewares from Adrian in Papyrus Gifts (Byres Road) and Wuid & Stitch (Dumbarton Road). Yep, that’s pretty much the West End of Glasgow covered.

RedApple Handmade (Glasgow) – has a new stockist in Glasgow. You can now find Alison’s work for sale at Wuid & Stitch on Dumbarton Road, Partick.

Skye Tails (Staffin) – bagged 3 new stockists in just one week! If you find yourself on the Isle of Skye, you can now buy doggy treats from Skye Tails in Bog Myrtle, Rankin’s and the Sligachan Hotel.

The Butterfly & Toadstool (Newton Stewart) – celebrated 3 years of being in business and self-employment on the 26th August. This coincided perfectly with Dee also confirming her 26th stockist in the same week!

Cabar Kids (Glasgow) – have had a lovely online write-up from the Harris Tweed Authority. Cabar Kids produce blankets using only official Harris Tweed so the acknowledgment and online praise for their work from the official statutory body was much welcomed.

Off With Her Head Millinery (Leven) – has been providing hair flowers for Criminal Minds FBI Technical Analyst Penelope Garcia (played by Kirsten Vangsness) for a while now. Kirsten has been performing at the Fringe all August and Lisa couldn’t miss the opportunity to meet her in person.

Wheesht (Stirling) – recently won a Theo Paphitis Small Business Sunday award. Thrilled to have yet another winner in the SBS Club and look forward to hopefully seeing you in Birmingham at the SBS 2020 event. Wheesht earlier in the year also won a Green Parent Natural Beauty ‘Best Buy’ award for their luxurious mango exfoliating balm. And …… their award-winning mango balm is now available at new stockists, The Eco Larder and Bambu in Edinburgh.

Sheila Kerr (Irvine) – has had such a successful few months, that thanks to her bespoke design service for engagement and wedding rings, her turnover has increased by over a third from this time last year. Sheila is also now offering tiara making workshops from her Irvine studio. And …. Sheila’s work also recently featured across the Scottish Life magazine of the Sunday Herald.

The Woolly Ferret (Balemartine) – is celebrating after making over 150 sales of her fabulous ‘Spheribeast’ critters. The 150th was a fabulous mimmoth and xxxx is now well on her way to hitting 200 in the next few weeks,

Angels’ Share Glass (Bridge of Allan) – are taking part in the Autumn Fair in Birmingham in early September, thanks to Theo Paphitis. As an SBS winner, Angels Share Glass managed to claim one of 12 highly coveted spots provided by MrP in the #SBS Pavilion. They’ll be there showcasing their whisky and gin-filled Christmas baubles and Gin Pigs among other things. Angels’ Share Glass also appeared recently on BBC tv show ‘A Matter of Life & Debt’ which highlighted Karen and Tom on their journey to help keep the ancient craft of glassblowing alive.

The Silver Grasshopper (Raasay) – welcomed a very special couple to the Make your Own wedding rings course. Fiona herself and her husband-to-be designed and made their own rings for their big day. Best of luck to Fiona and Iain for their wedding at the start of October.

Gina Lillycrop Designs (Wigtown) are super busy in the studio after a monumental order from one stockist. Gina is busy making a massive 29 lampshades as well as cushions, embroidered pictures, and a rug all to go out soon.

Sandra Vick (Penicuik) – has a new stockist to add to her ever-growing list, and as they were only a 3omin drive away, Sandra was able to deliver their order in person. You can now find Sandra’s beautiful Scottish bird-inspired mugs and jugs for sale at New Hopetoun Gardens in Broxburn.

The Urban Pirate (Glasgow) – is on the move! After many years in the same Glasgow premises, the Pirate is packing up and moving to a new and larger workshop with plenty of room for printing his own t-shirts. More details on when and where he’s moving to follow.

Neon Gray (Glasgow) – has had the keys to her own awesome studio in The Hidden Arcade for one year. When Lesley took hold of the keys on 1st September last year there was a pretty big job ahead to transform the previous dull room into a bright, welcoming space. Lesley worked hard and Neon Gray with premises opened mid-November and has been going strong ever since.

HazelMadeIt (Ardfern) – enjoyed a wonderful press piece about her fabulous felting business in the Press & Journal. Hazel was exhibiting at the Aberdeen Art Fair after its return to the Music Hall for the first time in 4 years. You can read the full article about Hazel here.

Hole In My Pocket (Glasgow) – is celebrating after their collection of bears and sausage dogs cards were shortlisted for the ‘Best Cute Range’ in this year’s Henries. Over 14,000 card designs were entered so to get down the final chosen 6 is a huge achievement. The winners of the Henries (essentially the Oscars for those in the greetings card business) will be announced at lavish black-tie awards do in London this October. Good luck Hole in My Pocket! 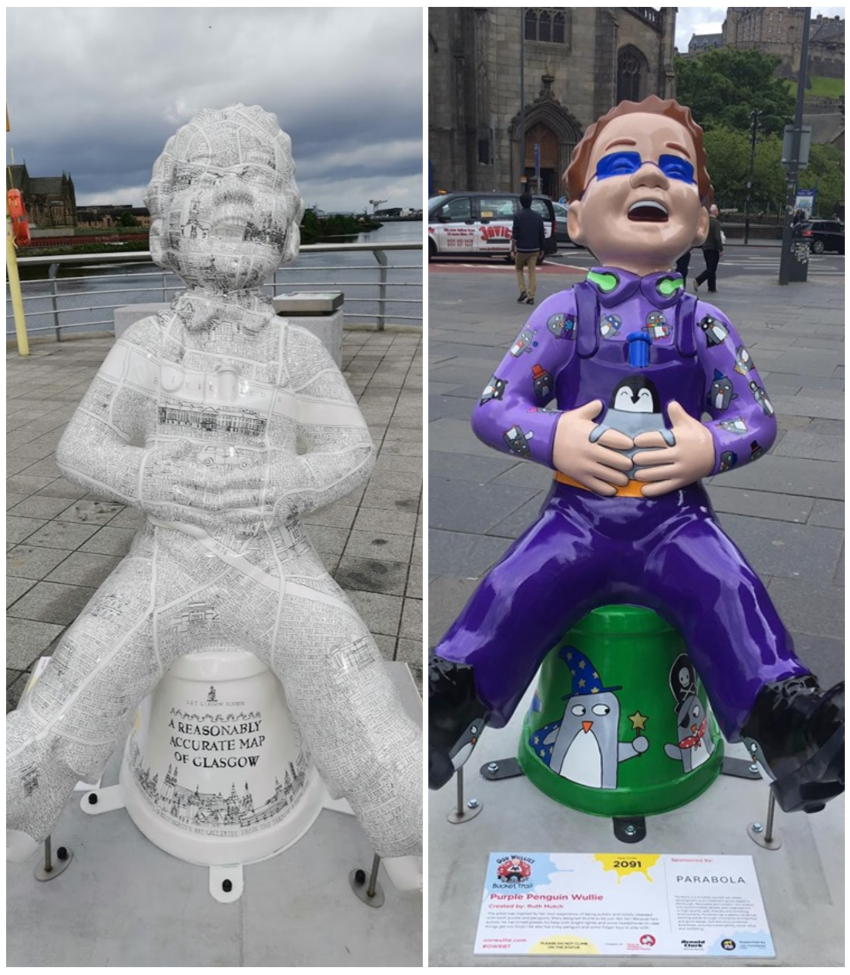 Simmerdim Design (South Queensferry) – is going full time! After nearly a decade of childminding and 3 years of juggling childminding with glass making, Sally has given up the day job to focus on the glass. The Simmerdim home studio has been expanded and Sally is excited for what’s to come next.

Scottish Knitwear For Kids And Grown Ups (Galashiels) – recently had a commission from a very well known lady for a knitted Aran wool jacket. Unfortunately, due to client confidentiality that’s all we can say on the matter, Sandra won’t even tell us who it was!

Congratulations everyone for all the great news. Awards, nominations, new stockists, anniversaries, huge sales, art trails, press coverage, events, celebrities. Love our every amazing Shop Scotland superstar team of talent. Keep an eye out for the next bundle of good news coming soon ….

Our talented team of Shop Scotland makers, designers and do’ers have been busy as always creating, selling and exhibiting. Quite a few of them, however, have been celebrating their own small business success stories recently. Here are a few of the reasons we’re raising a glass to our amazing Shop Scotland members tonight. Congratulations!   Sheila Kerr Jewellery (Irvine) –  was nominated for and won the ‘Independent Jewellery Store of the Year’ in […]